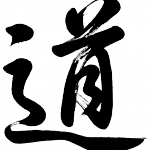 Aikido is a traditional Japanese martial art (Budō). The word “aikido” is formed of three kanji:

Aikido helps the practitioner to develop physically, mentally and spiritually with the ultimate goal of finding personal fulfilment and a state of inner peace. 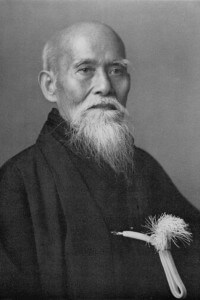 In Aikido we train ourselves to harmonize with the universe through an internal process that begins in a state of confrontation and evolves into a state of non-confrontation, revealing that the most effective way to resolve a conflict caused by an opponent, is not confronting directly but join him in helping him to come into harmony and achieve resolution of the conflict.

Aikido philosophy and the versatility of the art makes it ideal for students of all ages.

Aikido was developed by Morihei Ueshiba as a synthesis of his martial studies, philosophy, and religious beliefs.

Aikido is often translated as “the way of unifying (with) life energy or as “the way of harmonious spirit”. Ueshiba’ s goal was to create an art that practitioners could use to defend themselves while also protecting their attacker from injury. 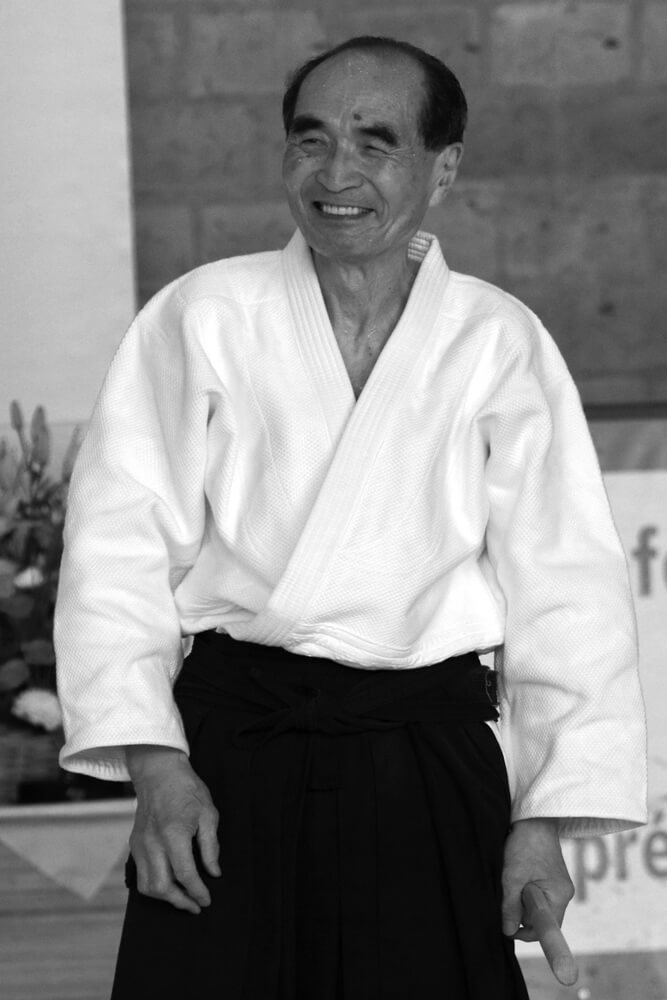 Aikido techniques consist of entering and turning movements that redirect the momentum of an opponent’s attack, and a throw or joint lock that terminates the technique.

We primarily study according to the teaching of Tada Hiroshi shihan (9th dan Aikikai). He is one of the last direct students of the aikido founder, Morihei Ueshiba.

Meditation and breathing exercise are part of every aikido class in our dojo. We practice system of breathing and meditative exercises called Ki no renma to supplement aikido training. Ki no renma was developed by Tada Hiroshi shihan (9th dan Aikikai) based on the teaching of Nakamura Tempu and Ichikukai Dojo. 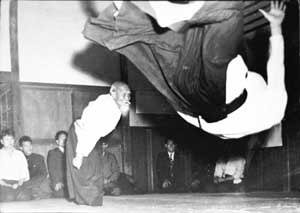 The founder of Aikido, Morihei Ueshiba, was born on December 14, 1883, to a farming family in an area of the Wakayama Prefecture now known as Tanabe. Among five children, he was the only son. From his father Yoroku, he inherited a samurai's determination and interest in public affairs, and from his mother an intense interest in religion, poetry and art. In his early childhood, Morihei was rather weak and sickly, which led to his preference of staying indoors to read books instead of playing outside. He loved to listen to the miraculous legends of the wonder-working saints "En no Gyoja" and "Kobo Daishi," and was fascinated by the esoteric Buddhist riturals. Morihei had even considered becoming a Buddhist priest at one time. 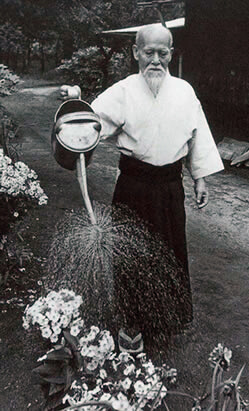 To counteract his son's daydreaming, Yoroki would recount the tales of Morihei's great-grandfather "Kichiemon," said to be one of the strongest samurai of his day, and encouraged him to study Sumo wrestling and swimming. Morihei became stronger and finally realized the necessity of being strong after his father was attacked and beaten by a gang of thugs hired by a rival politician.

School seemed to bore Morihei as his nervous energy needed a more practical outlet. He took on several jobs, but they too seemed to disillusion him. During a brief stint as a merchant, he finally realized he had an affinity for the martial arts. He greatly enjoyed his study of Jujutsu at the Kito-ryu dojo and Swordsmanship at the Shinkage Ryu training center. But as luck would have it, a severe case of Beri-Beri sent him home, where he later married Itogawa Hatsu.

After regaining his health during the Russo-Japanese War period, he decided to enlist in the army. Standing at just under five feet tall, he failed to meet the minimum height requirements. He was so upset that he went immediately to the forests and swung on trees trying desperately to stretch his body out. On his next attempt to enlist, he passed his examination and became an infantryman in 1903. During this time he impressed his superiors so much that this commanding officer recommended him for the National Military Academy, but for various reasons he declined the position and resigned from active duty. 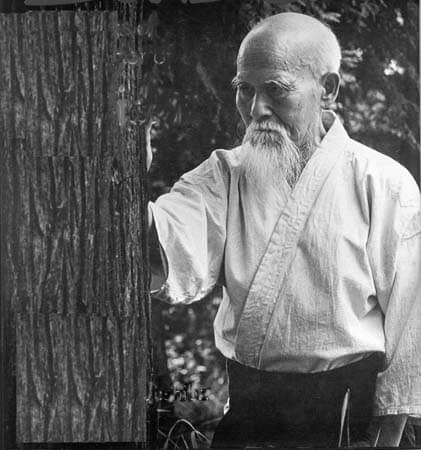 Morihei returned home to the farm. Having grown strong during his time in the military, he was now eager to continue physical training. His father built a dojo on his farm and invited the well-known Jujutsu instructor Takaki Kiyoichi to tutor him. During this time, young Ueshiba became stronger and found he possessed great skills. At the same time he became more interested in political affairs. In the Spring of 1912, at the age of 29, he and his family moved into the wilderness of Hokkaido. After a few years of struggle, the small village started to prosper. Ueshiba had grown tremendously muscular, to the point that the power he possessed in his arms became almost legendary.

It was during this time in Hokkaido that he met Sokaku Takeda, grandmaster of Daito-ryu Aiki Jutsu. After meeting Takeda and find himself no match for his teacher, Ueshiba seemed to forget everything else and threw himself into training. After about a month, he went back to Shirataki, build a dojo and invited Takeda to live there, which he did.

Upon hearing of his father's serious illness, Ueshiba sold off most of his property and left the dojo to Takeda. He would not to return to Hokkaido. On his journey home, he impulsively stopped in Ayabe, headquarters for the new Omoto-kyo religion. Here he met the master of the new religion, Deguchi Onisaburo. After being enthralled with Ayabe and Deguchi, he stayed three additional days and upon returning home, found that he had stayed away too long. His father had passed away. Ueshiba took his father's death very hard. He decided to sell off all his ancestral land and move to Ayabe to study Omoto-kyo. For the next eight years, Ueshiba studied with Deguchi Onisaburo, taught Budo, and headed up the local fire brigade.

A pacifist, Deguchi was an advocate of non-violent resistance and universal disarmament. He was noted to have said, "Armament and war are the means by which the landlords and capitalists make their profit, while the poor suffer." It is intriguing that a man of this nature could become so close to a martial artist such as Ueshiba. However, it did not take long for Deguchi to realize that Ueshiba's purpose on earth was " to teach the real meaning of Budo: an end to all fighting and contention."

The study of Omoto-kyo and his association with Onisaburo profoundly affected Ueshiba's life. He once stated that while Sokaku Takeda opened his eyes to the essence of Budo, his enlightenment came from his Omoto-kyo experiences. During his early 40s (around 1925), Ueshiba had several spiritual experiences which so impressed him that his life and his training were forever changed. He realized the true purpose of Budo was love that cherishes and nourishes all beings.

For the next year, many people sought Ueshiba's teaching, among them Tomiki Kenji (who went on to make his own style of Aikido) and the famous Admiral Takeshita. In 1927, Deguchi Onisaburo encouraged Ueshiba to separate from Omoto-kyo and being his own way. This he did and moved to Tokyo. Ueshiba's following had grown to the point that he was moved to build a formal dojo in the Ushigome district of the city (the present site of the Aikido World Headquarters). While the dojo was being constructed, many high-ranking instructors of other arts, such and Kano Jigoro, came to visit. They were so impressed that they would dispatch their own students to study under Ueshiba.

In 1931, the "Kobukan" was finished. A "Budo Enhancement Society" was founded in 1932 with Ueshiba as Chief Instructor. It was about this time that students such as Shioda Gozo, Shirata Rinjiro and others joined the dojo. Up to the outbreak of World War II, Ueshiba was extremely busy teaching at the Kobukan, as well as holding special classes for the major military and police academies. For the next 10 years, Ueshiba became more and more famous and many stories began to appear in writing. His only son, Kisshomaru, being the "bookworm" that he was, did much of the writing and documenting of the evens of his life.

In 1942, supposedly because of a divine command, he longed to return to the farmlands. He had often said that "Budo and farming are one. " The war had emptied the Kobukan, and he was tired of city life. Leaving the Kobukan in the hands of his son Kisshomaru, he moved to the Ibaraki Prefecture and the village of Iwama. Here he build an outdoor dojo and the now famous Aiki Shrine.

Iwama is considered by many to be the birth place of modern-day Aikido, "the Way of Harmony." Prior to this move, his system had been called Aikijutsu, then Aiki-Budo, still primarily a martial art rather than a spiritual path. From 1942 (when the name Aikido was first formally used) to 1952, Ueshiba consolidated the techniques and perfected the religious philosophy of Aikido.

After the war, Aikido grew rapidly at the Kobukan (now called Hombu Dojo) under the direction of Kisshomaru Ueshiba. Morihei Ueshiba had become famous as "O Sensei" or "The Grand Teacher," the Master of Aikido. He had also received many decorations from the Japanese government. Right up to the end of his life, O Sensei refined and improved his "Way", never losing his dedication for hard training.

In early Spring 1969, O Sensei fell ill and told his son Kisshomaru that "God is calling me...." He was returned to his home at his request to be near his dojo. On April 15th, his condition became critical. As his students made their last calls, he gave his final instructions. "Aikido is for the entired world. Train not for selfish reasons, but for all people everywhere."

Early on the morning of April 26th, 1969, the 86-year-old O Sensei took his son's hand, smiled and said, "Take care of things" and died. Two months later, Hatsu, his wife of 67 years, followed him. O Sensei's ashes were buried in the family temple in Tanabe. Every year a memorial service is held on April 29th at the Aiki Shrine in Iwama.

True victory does not come from defeating an enemy, true victory comes from giving love and changing an enemies heart.

As soon as you concern yourself with the "good" and "bad" of your fellows, you create an opening in your heart for maliciousness to enter. Testing, competing with, and criticizing others weakens and defeats you.

When you bow deeply to the universe, it bows back; when you call out the name of God, it echoes inside you.

To injure an opponent is to injure yourself. To control aggression without inflicting injury is the Art of Peace.

In the art of peace, a single cut of the sword summons up the wondrous powers of the universe. That one sword links the past, present, and future; it absorbs the universe. Time and space disappear. All of creation, from the distant past to the present moment, lives in the sword. All human existence flourishes right here in the sword you hold in your hands. You are now prepared for anything that may arise.

The Art of Peace begins with you. Work on yourself and your appointed task in the Art of Peace. Everyone has a spirit that can be refined, a body that can be trained in some manner, a suitable path to follow. You are here for no other purpose than to realize your inner divinity and manifest your inner enlightenment. Foster peace in your own life and then apply the Art to all that you encounter. One does not need buildings, money, power, or status to practice the Art of Peace. Heaven is right where you are standing, and that is the place to train.

Aiki is not a technique to fight with or defeat an enemy. It is the way to reconcile the world and make human beings one family.

Your spirit is the true shield.

Thanks to René Ochiai for calligraphy 'Do'' - The way!!!